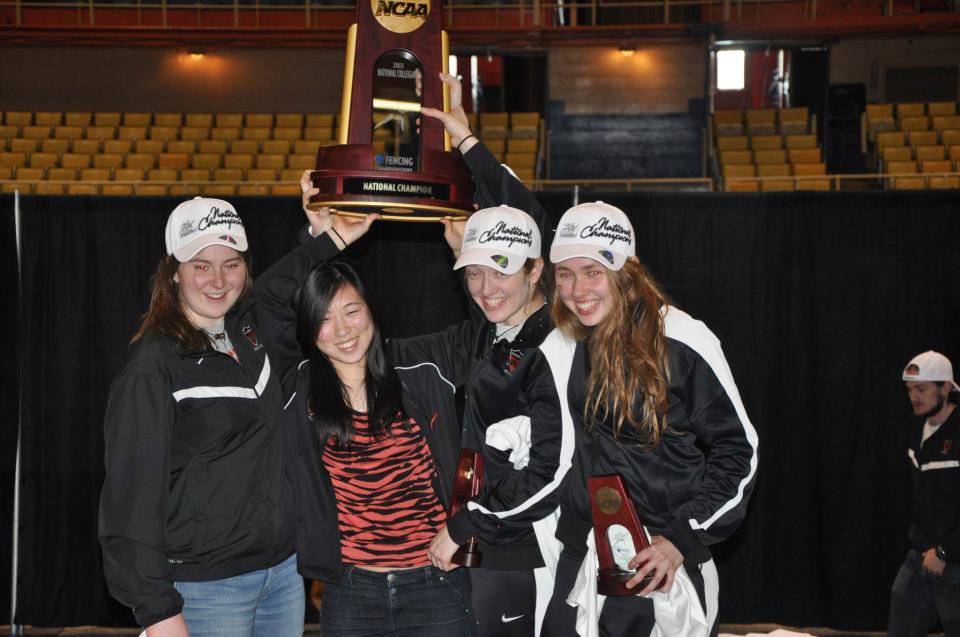 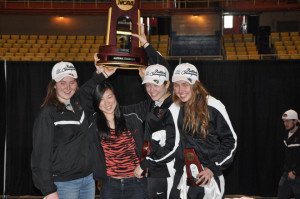 Princeton Athletics fans are aware that the 2012-13 academic year resulted in an impressive four national championships for the Tigers. Three of the four titles were won by teams; field hockey, men’s distance medley relay team (indoor track & field) and men’s and women’s fencing. The final national title was won by fencer Eliza Stone ’13, who captured the individual sabre NCAA Championship this past winter. What many fans don’t know is the story of how Eliza found herself atop the medal platform in San Antonio. Due to an incredibly complicated NCAA selection system, Stone did not initially qualify to compete in the sabre championship. An unselfish act by one of her teammates, Diamond Wheeler ’14, gave Stone the opportunity to compete alongside her younger sister, Gracie Stone ’16.

WAS THE NCAA POINT QUALIFICATION SYSTEM AN OBSTACLE FOR YOUR TEAM THIS PAST SEASON?

ELIZA: Yes, it did prove problematic at times. One of my teammates, Katharine Holmes ’15, and I were placed in a difficult position because of our choices to compete in the national and international circuit as well as the NCAA circuit. We wanted to try to make US teams this season while also balancing the NCAA season, and it proved more difficult than anticipated. Because the NCAA and international tournaments often conflicted, we had to choose which ones of each circuit we would attend. We planned it out so that we could go to internationals and accumulate just enough regular-season NCAA bouts to qualify to go to Regionals, but in the end the NCAA tournament we were relying on for those bouts (the Ivy League meet) was postponed to a date after the cut-off for determining who was able to go to Regionals. Had my team not rushed us to an extra NCAA meet so that we could get those bouts, we both would have fallen victim to the NCAA’s point qualifying rules and neither of us would have gone to Regionals or to the Nationals after that.

WHEN DID YOUR TEAM FIND OUT THE IVY LEAGUE TOURNAMENT WAS POSTPONED?

DIAMOND: The original date for Ivies collided with Winter Storm Nemo (weekend of February 8-10, 2013), and we found out it was canceled the morning we were going to leave. There wasn’t much we could do. Our coach told us to keep our ears open for when the new date would be. A few people on the team were put in a tough spot because they had to choose between going to World Championships (which could further their individual careers) or NCAAs since they needed the bouts from Ivies to qualify for NCAAs.

WHEN DID YOU FIND OUT THE POSTPONED IVY LEAGUE TOURNAMENT WOULDN’T COUNT FOR NCAA QUALIFICATION?

DIAMOND: About a week after they rescheduled Ivies, we learned that the rescheduled tournament would not count. Almost immediately, our amazing coach (Coach Zoltan Dudas) threw together a meet with neighboring colleges in order to get our needed bouts in order to qualify for NCAAs. Many Ivy League teams suffered from the NCAA committee’s decision to invalidate the legitimacy of Ivies bouts.

WHEN DID YOU FIND OUT YOU WOULDN’T QUALIFY ON YOUR OWN TO COMPETE AT NCAAs?

ELIZA: I found out that I would not qualify for the NCAA Nationals on my own immediately after the Regional Qualifiers were completed. After it was over, the points were tallied up and due to a complicated set of rules regarding previous NCAA season records and the result at Regionals, it turned out that my sister, Gracie Stone ’16, and my teammate, Diamond Wheeler ’14, were ranked ahead of me. I technically qualified that day, but because they both qualified ahead of me, this meant that I was third on my squad. According to the rule that states that only two members from each squad may go to the NCAA Nationals, I was therefore automatically eliminated from the running.

WHEN DID YOU DECIDE TO GIVE YOUR SPOT TO ELIZA?

DIAMOND: Originally, I didn’t think I qualified for NCAAs because I came in third, behind my two teammates at Regionals. But after factoring in my season, I came in second over Eliza. I was happy for a split-second and then very conflicted. Both Gracie and I knew that Eliza was the best fencer out of all of us and deserved to go to NCAAs, so it was a matter of who would give up their spot for Eliza, not if we would give up our spot for Eliza. After a few days of thinking, I met up with Gracie, and I decided that it was a once-in-a-lifetime opportunity for the Stone siblings to be on the NCAA team together, so I stepped down.

HOW DID YOU FEEL AFTER YOU LEARNED THAT DIAMOND WAS GOING TO GIVE YOU HER SPOT?

ELIZA: When Diamond learned that I didn’t qualify, she and Gracie talked together and, for some reason I don’t fully understand, they assured me that one of them would step down for me. They had no reason to do this. They both qualified for the national team and of course they each wanted to go. But still they were assuring me that one would step down. I know that they talked it over back on campus and then they called me and Diamond told me that she had decided to be the one to step down because she wanted to give me and my sister the gift of being able to compete together. (This was the only year my sister and I could be on the team at the same time, as she was a freshman and I was a senior.) She told us that she wanted us to have this once-in-a-lifetime chance together, and so she gave up her place for me. She gave me a gift I cannot ever really repay. I would never have gone to the 2013 NCAA National Championships had she not done this for me, and so I owe everything I did there to her.

Diamond is a senior studying molecular biology, and has been elected as a team captain for this season. Eliza is back on campus, and is continuing her competitive training with aspirations to compete at the 2016 Olympics.