Princeton assistant women’s soccer coach Esmeralda Negron ’05 went to Haiti this summer on a service project. Here is her story in her own words. 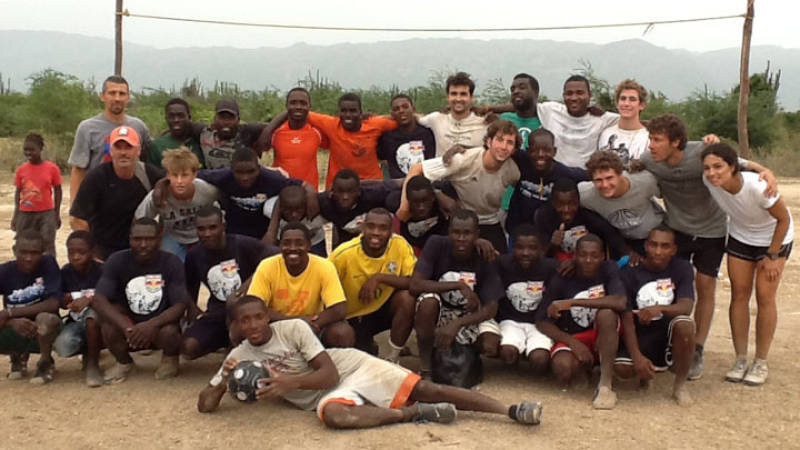 Three weeks ago I embarked on my first service trip. I was headed to Haiti with the “Konekte” group, which means connect in Creole. The group was comprised of families, young adults and Princeton Football Club (PFC) soccer coaches from the Princeton community. Our group leader was Anne Hoppenot, whose son Antoine, was a former Princeton soccer player and currently plays professionally with the MLS’s Philadelphia Union. Despite a mix of backgrounds we all shared the same eagerness to arrive and get started on our mission. While we had no idea what to expect we did know that the country was still in need after the devastating earthquake that hit Port Au Prince in 2010, killing roughly 500,000 people.

After retrieving our luggage we began our nearly two-hour trek to our hotel in the town of Fonds Parisien. We would be doing all of our work in Fonds Parisien and the surrounding villages (east of Port au Prince, in rural Haiti). It would be a combination of construction work on an adult professional school along with soccer and art activities with the local villages. Our bus was old and had no air conditioning, yet compared to the surroundings it seemed quite luxurious. Along the road we passed by tent villages where the “US Aid” emblem on the tents was nearly faded out. It was surreal to see so many people still without proper homes, living in old and battered tents two years later. We certainly did not see any strip malls along the way, and the comforts of Princeton, N.J. quickly faded. In their place were some small businesses and stands selling local produce and used clothing and shoes.
When we arrived in Fonds Parisien at the Peace and Love Hotel, we quickly realized that we would be completely out of our element for the next 10 days. Our hotel rooms were not equipped with air conditioning or hot water, and electricity had to be used sparingly. The Peace and Love Hotel would not be considered five star by American standards, but our group certainly found comfort in returning there every night. We quickly realized that fresh running water and electricity were both luxuries in the area, and we felt blessed to have these simple comforts.

During our first two days in Haiti, we did construction on the adult professional school whose anticipated fall completion seemed improbable, as the school relies on volunteer groups to continue construction. On the first day, we dug a three-foot trench along one side of the school for the surrounding security fence. It took us seven hours and several pick axes, rakes, and shovels to complete the trench. Our second day was the most grueling. We started work at 7:30 a.m. and finished at 7:30 p.m. Our 25-person team worked with local construction workers and volunteers to pass 20,000 buckets of cement in an assembly line to cement the entire roof of the school. We were exhausted by the end of the two days but felt a great sense of accomplishment at what we had achieved as a team.

After our first few days of construction we moved into the next phase of our trip and my favorite. We interacted with the local people; participating in soccer activities as well as arts and crafts with children and adults in local villages. One of the villages was accessible by car but the other, called village Canès, required a 30-minute hike to get to. The people of village Canès had no direct access to fresh water, having to walk nearly an hour one way just to retrieve one bucket of fresh water. They all lived in mud huts and had no access to electricity or proper plumbing. Many of these people did not have food readily available to them either. A sound education system and organized athletics where children could grow up to realize their dreams did not seem to be readily available. It was hard accepting the fact that we could not fix everything for them. However, the joy we shared in our interactions with each other and our common love for the game of soccer certainly went a long way.
What I found really amazing about the Haitian people was their enthusiasm and excitement for the game. Despite how impoverished some of the villages were, you could always find a soccer field. None of them had grass. Most were just dirt with some rocks mixed in and goals made out of sticks and branches of trees, but that made it all the more incredible.

During the course of the 10 days, I had the opportunity to play with and coach young girls, be the only female competing in pick-up matches with men and help organize a men’s tournament for nearby villages. All of the young girls were eager to play with me and the older women were enthralled that a woman was competing with men. Every environment was intense in a good way and once the balls got rolled out you could see the sheer joy on everyone’s faces.

Throughout my career as a player and coach, soccer has taken me all over the world. My trip to Haiti, however, was certainly a life-changing one. I was humbled by how little many of the people I interacted with had, yet how spirited they were. I gained a deeper appreciation for what I have and the experiences I have been afforded.

I would like to give a special thanks to the Friends of Princeton Soccer and the Princeton Varsity Club as my trip was an extension of the PVC Service Circle program as well as the department’s motto of “Education Through Athletics.”

My outlook on life has certainly changed, and I will never forget the experiences I was able to share with all the young children and adults in Haiti. I will forever be grateful for the opportunities I have had first to attend and now to coach at a university like Princeton.

Many of our players and staff have made contributions abroad. Ron Celestin, our assistant coach, is from Haiti and it was great to be able to gain a greater understanding and appreciation for his culture and country. Diane Metcalf-Leggette ‘14, Claire Pinciaro ‘13, MicKenzie Roberts-Lahti ’15 and Kristin Watson ‘13 are all current Princeton women’s soccer players who have also participated in service trips to Haiti. Sara Chehrehsa ‘12 is overseas in Uganda for the year working with Soccer Without Borders. Rachel Sheehy ’13, Alison Nabatoff ’13, and Rebecca Shmoys ’13 also did trips with Soccer Without Borders in Nicaragua. The Princeton women’s soccer program hopes to continue sharing their love for the game with people around the world.