Finalists Announced for Class of 1916 Cup 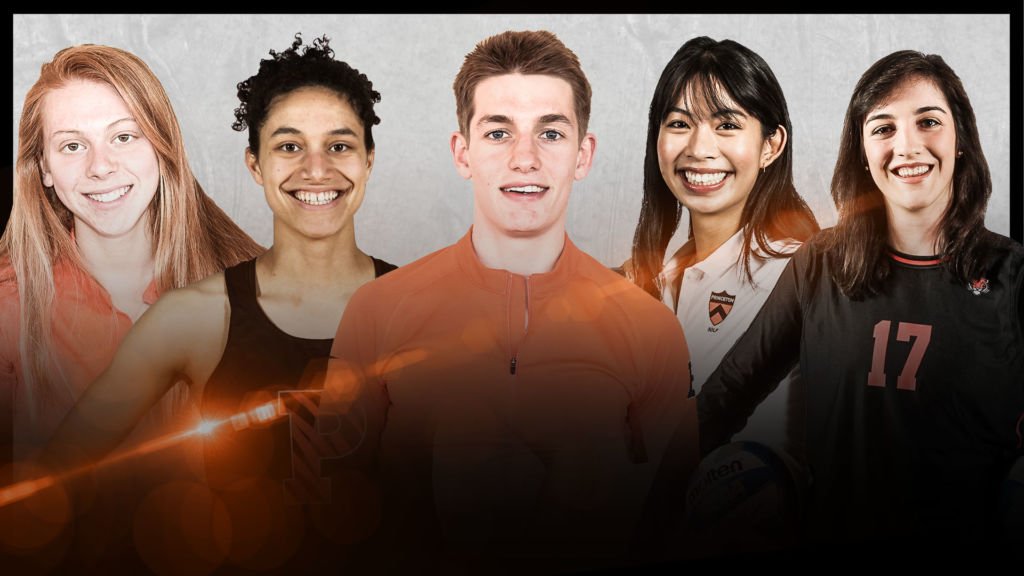 Five Princeton student-athletes have been named finalists for the Class of 1916 Cup which is presented annually to the Princeton varsity letterwinner who continuing in competition in his or her senior year achieved at graduation the highest academic standing. Given by the Class of 1916 on the occasion of its 50th reunion.

The Class of 1916 Cup will be presented at the Gary Walters ’67 Princeton Varsity Club Awards Banquet on May 28. The annual Princeton tradition will be modified this year, held virtually starting at 8 p.m. EST. For more information on the 2020 banquet, click here. 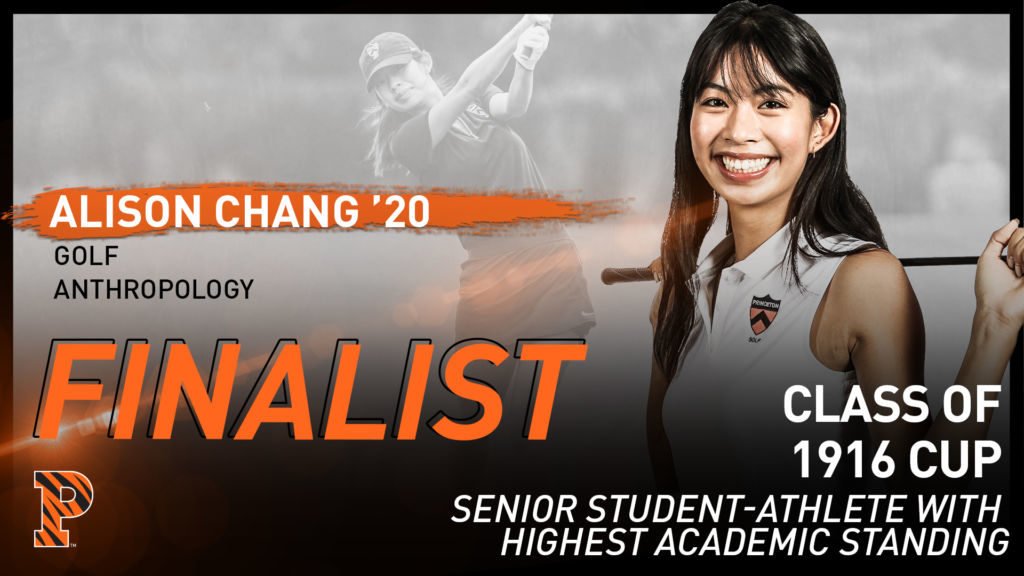 Off-campus, Chang has volunteered locally at the Princeton Nursery School and Merwick Rehabilitation Center, and worked as an outreach coordinator for Camp Kesem, a program dedicated to supporting children impacted by a parent’s cancer. 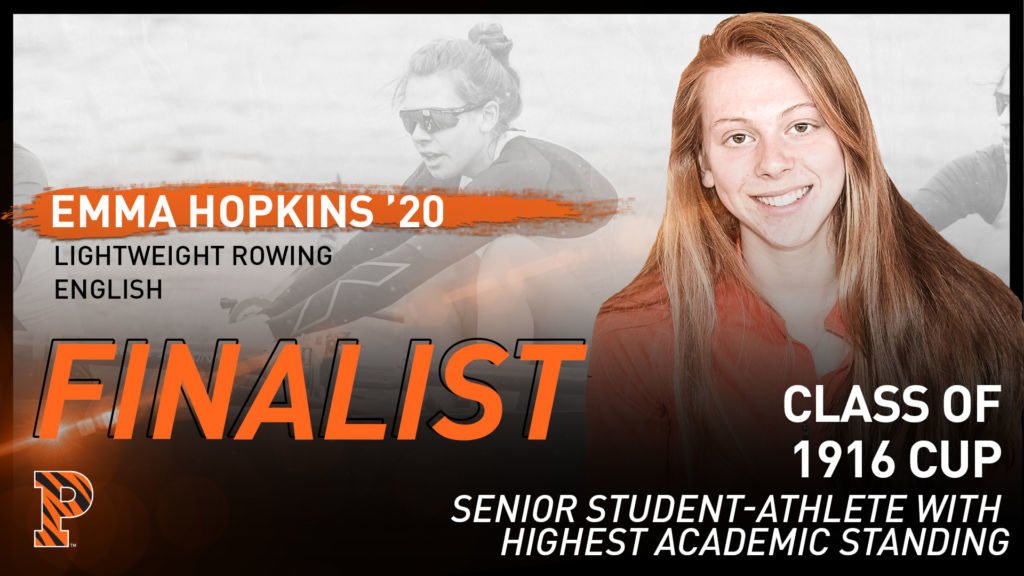 Emma Hopkins is an English major with a certificate in urban studies, and captain for the women’s lightweight rowing program. Twice named to the Intercollegiate Rowing Association (IRA) All-Academic Team, Hopkins rowed in the first varsity eight each of her four years, leading the Tigers to medals at six different championship regattas including their first Eastern Sprints gold medal since 2011.

A Stillwater, N.Y. native, Hopkins served as a fellow for the Princeton Writing Center each of her four years, helping undergraduate, graduate, and post-doctoral students to strengthen their writing and argumentative skills. She has also served as a Student-Athlete Wellness Leader and team leader for Nova Christian Fellowship during her time at Princeton. 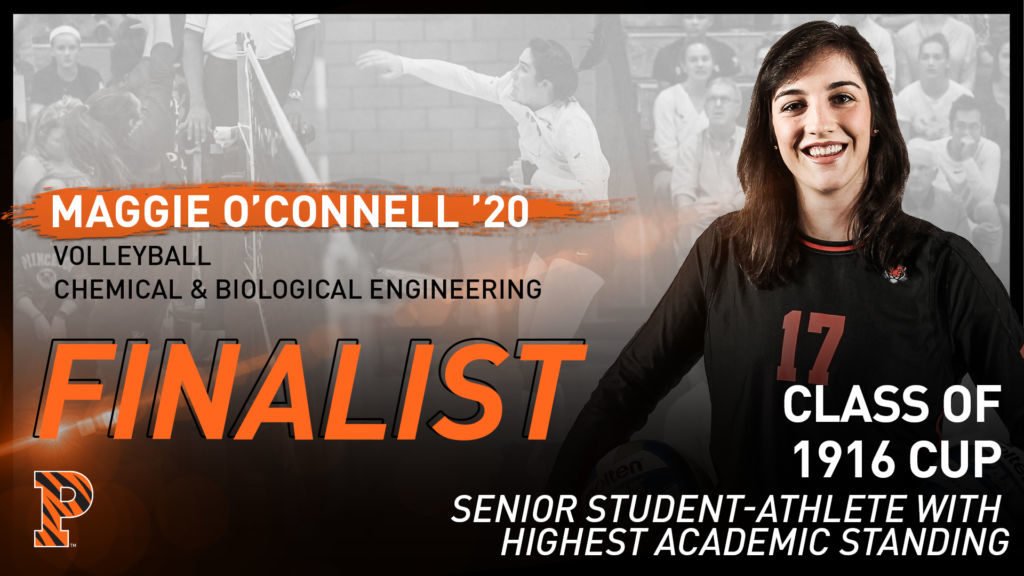 Maggie O’Connell, a chemical and biological engineering major with a certificate in sustainable energy, is one of the most decorated players in Princeton women’s volleyball history. O’Connell is four-time first-team All-Ivy League selection, and led the Tigers to three Ivy League titles and three NCAA tournament appearances. She was the Ivy League Player of the Year in 2017.

O’Connell, from Katy, Texas, is also a three-time Academic All-Ivy League honoree. She has served as a Peer Academic Tutor for the McGraw Center for Teaching & Learning and on the Princeton Chemical and Biological Engineering Undergraduate Council. Additionally, O’Connell co-authored a published paper during her junior year, and was a recipient of the Lidow Thesis Fund.

O’Connell is also a finalist for the C. Otto von Kienbusch Award, awarded annually to a Princeton senior woman who has demonstrated general proficiency in athletics and the qualities of a true sportswoman. 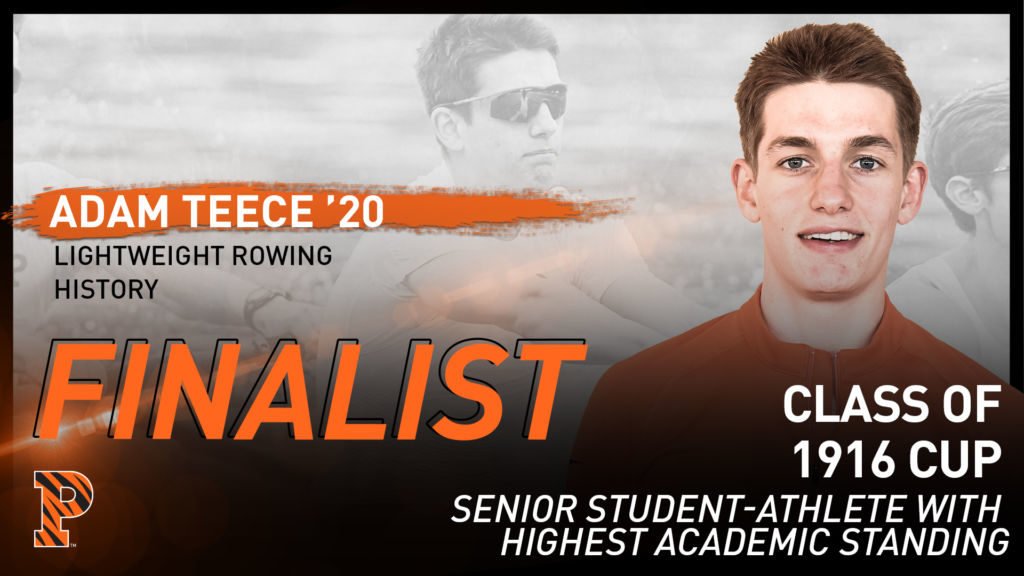 Adam Teece is a history major and four year mainstay in the first varsity eight for Princeton men’s lightweight rowing. He helped the Tigers to consecutive silver medals at the Intercollegiate Rowing Association (IRA) National Championship, the first time the program has done so since 2009-10. Teece also helped the 1V to two wins at the prestigious Henley Royal Regatta Championship in 2018.

A team captain from Newbury, U.K., Teece was twice honored on the IRA All-Academic team, and recently named Academic All-Ivy for the spring season. On campus, he was awarded the Shapiro Prize for Academic Excellence for the 2017-2018 academic year. Teece has been an active volunteer with the Special Olympics, and helped organize Princeton rowing’s “Pull for a Cure” challenge, benefiting breast cancer research. 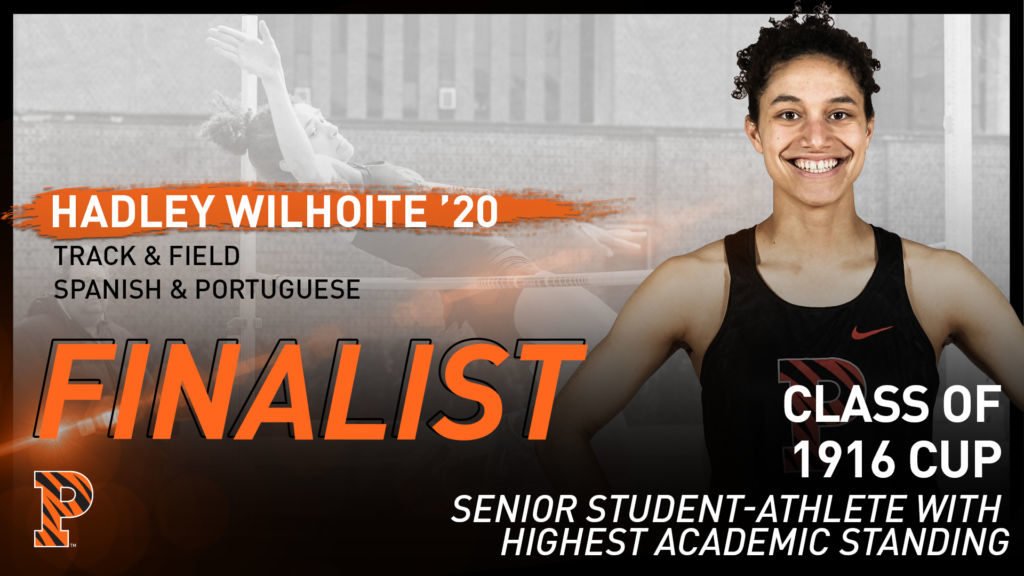 Hadley Wilhoite is a Spanish and Portuguese major from Portland, Ore., and has earned points for Princeton women’s track & field in both the high jump and sprint relays during her career. She was recently awarded the program’s John H. Chang ’60 Award, which recognizes one’s contributions to their teammates through their generosity, enthusiasm, commitment and dedication to the team.

Wilhoite was previously honored by the Spanish Department with the Premio Ángel Rama for excellence by an underclassmen in advanced Spanish courses. Her senior thesis investigated representations of dictatorship by examining illustrations of Rafael Trujillo, former president of the Dominican Republic. Wilhoite has served her community as a lead student-athlete volunteer for Reading with the Tigers and National Girls & Women in Sports Day.