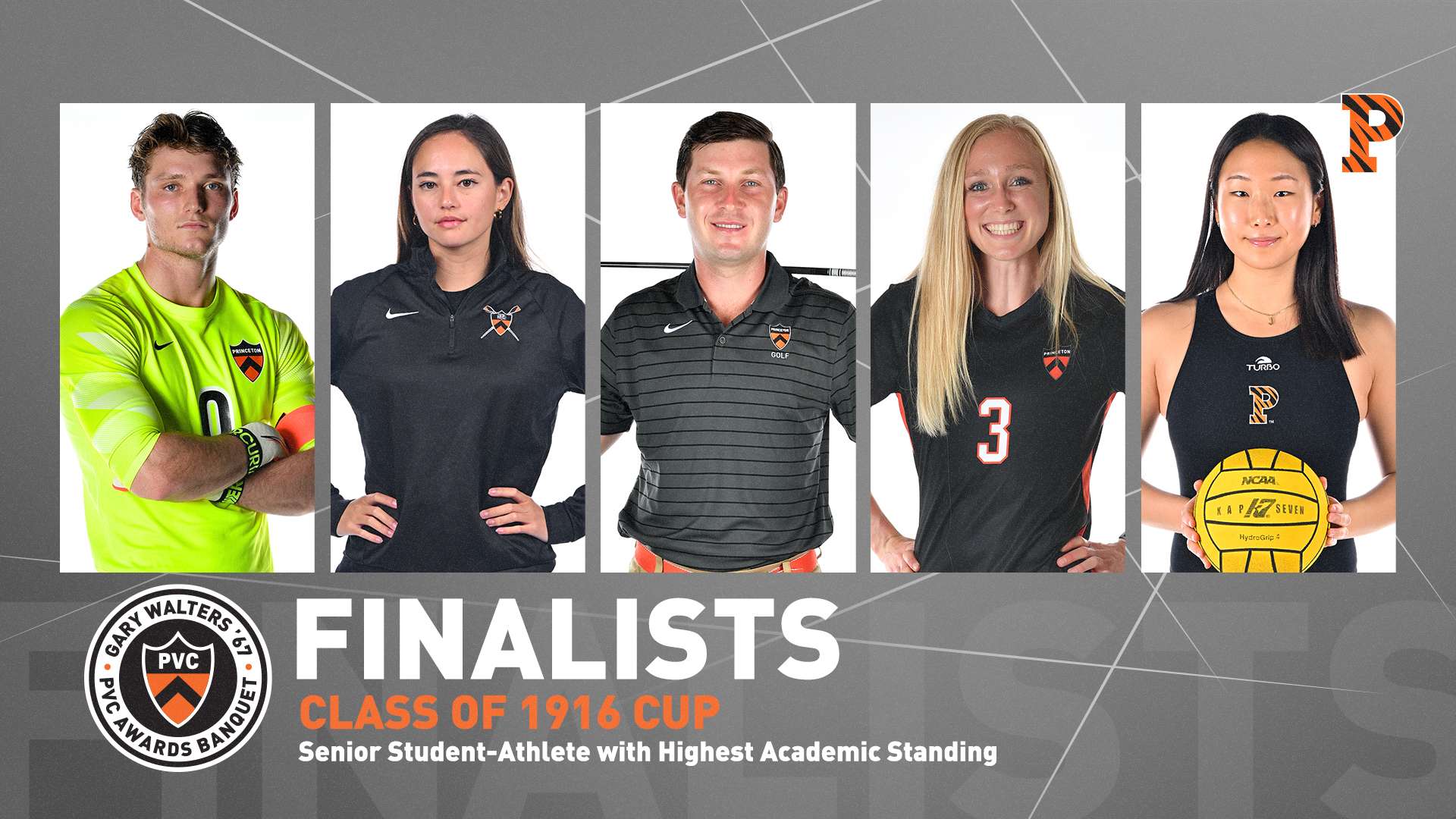 Five Princeton student-athletes have been named finalists for the Class of 1916 Cup, which is presented annually to the Princeton varsity letterwinner who achieved at graduation the highest academic standing. Given by the Class of 1916 on the occasion of its 50th reunion.

The Class of 1916 Cup will be presented at the Gary Walters ’67 Princeton Varsity Club Awards Banquet on Thursday, May 19th. For more information on the 2022 banquet, click here.

Campbell has helped the First Varsity to victories over Georgetown, Drexel, Temple, Navy and Cornell during the 2022 campaign. During last spring’s abbreviated season, she guided the Tigers to four wins and an eighth-place finish at the IRA National Championships.

An IRA All-Academic Team honoree from Milwaukee, Wis., Campbell serves as secretary for the Varsity Student-Athlete Advisory Committee (VSAAC) and as a Writing Center Fellow. She is a representative on the Politics Department Undergraduate Committee and volunteers with the Petey Greene Program, tutoring prison inmates in various educational subjects.

Kim, from Beverly Hills, Calif., serves on campus as a resource for the Health Professions Advising program. In this role, she mentors fellow student-athletes and helps them seek clinical and service experiences as they pursue future careers in the health care industry. She also volunteers with the Princeton Medical Center and supports education around sexual violence in her role as a SHARE peer on campus.

Additionally, Kim volunteers as an outreach ambassador for By Your Side, an organization that works to enhance social opportunities and visibility for students with special needs.

Mayer helped lead the Tigers to the 2019 Ivy League championship, and paced Princeton in scoring at the NCAA Athens Regional. He was named PING All-Northeast Region and awarded the program’s Martin P. “Buff” Wohlforth ’76 Memorial Award, presented to the individual who has contributed the most to the Princeton golf program, for that campaign.

Mayer served as co-president of the Student-Athlete Service Council (SASC) for the past two years, helping to organize a variety of on and off-campus service initiatives to connect varsity student-athletes with the Princeton community. He has also been an active volunteer coaching golf with the Special Olympics of New Jersey.

A midfielder and Academic All-Ivy honoree for Princeton women’s soccer, she helped the Tigers to an Ivy League championship and two NCAA Tournament appearances during her three full seasons, including an NCAA opening round victory over Vermont this past fall. Noonan assisted on the Tigers’ go-ahead goal in their upset bid of #8 TCU in the Round of 32, eventually falling in double-overtime.

Noonan, from Highlands Ranch, Colo., has volunteered with the Denver Rescue Mission, assisting individuals living with addiction and homelessness. She has been active with Princeton Faith and Action and Athletes in Action, and volunteered as an academic tutor with Princeton-based Academic Success Today.

JACK ROBERTS ’22 | MEN’S SOCCER & GOLF
Jack Roberts is an operations research and financial engineering major who has captained both the men’s soccer and men’s golf programs during his time at Princeton.

Roberts, from Wellesley, Mass., was named second-team CoSIDA Academic All-American as voted on by the membership making up the Collegiate Sports Information Directors of America, becoming only the fourth Tiger soccer student-athlete ever to receive this honor.