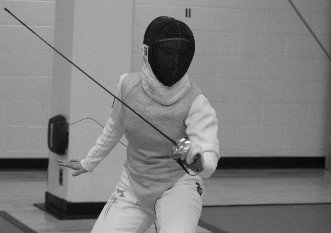 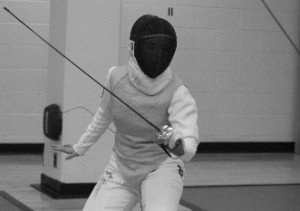 My journey as a Princeton athlete began a long time before my four seasons as a Tiger. When I was little, my parents did their best to encourage me and each of my siblings to find a passion. I tried a plethora of sports such as gymnastics, swimming and riding horses, but it is no wonder with three older brothers — who tied me to trees in their spare time — and family classics such as The Princess Bride, that I ended up in the sport of fencing at age eight.

Fencing, for those less familiar with the sport, is best described as a game of “physical chess”. Put simply, the goal is to score a set number of points against the opponent while simultaneously defending one’s own target, all in a limited amount of time. The sport is demanding on multiple levels, requiring a mix of agility, endurance, hand eye coordination, and the ability to make strategic decisions in a split second.
Within six months it became clear that I had found my passion. I spent the next seven years training and competing, and shortly after making my first US national cadet team I left my family to live and train at the club of the national coach. The training schedule was rigorous, but it brought my fencing to a whole new level.
The first thing that struck me when I became a part of the Princeton fencing team was that it functioned and competed as an actual team. This might seem self evident to the athletes of most other sports, but to me it was a revelation. Throughout my life as a fencer I had been accustomed to being out there on the strip by myself, where my wins and losses fell equally on my shoulders. Victories and defeats in collegiate fencing, however, depend on the performance of each member of the team. This shift in focus from the individual to the team gave me a fresh perspective of the sport and taught me valuable life lessons.
Not all the lessons were easy. As a freshman, for example, after enduring the wrath of my teammates for missing the most important Ivy meet in favor of an international event, I learned that being part of a team sometimes necessitates personal sacrifices. As an upperclassman I learned about leadership; the importance of tailoring workouts to fit the various needs of individuals, how to refocus and encourage the team despite the apparent strength of an opponent, and that successful leadership requires patience and humility. As most other Princeton athletes would affirm, I have also benefited greatly from lessons of time management, commitment, and perseverance.
It is only in hindsight that have I been able to fully appreciate these lessons. After graduation I spent a little over a year in rural China working for a non-governmental organization and teaching English. As an athlete I learned about leadership, perseverance and commitment. While working in ChinaI found that these skills carry over into many aspects of life, from adapting to a foreign culture to finding innovative ways to solve problems at work.

One thing that I am particularly thankful for as I reflect on my time at Princeton is the strong sense of unity that I experienced in the athletic community. I appreciate the support that I received from my teammates, athletes on other teams, and I am specifically grateful for the Princeton Varsity Club and its efforts to foster a unified community of athletes while furthering the interests of athletes on campus.