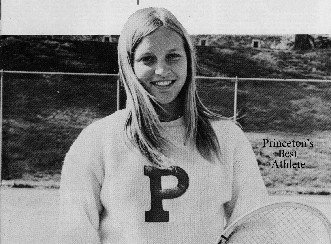 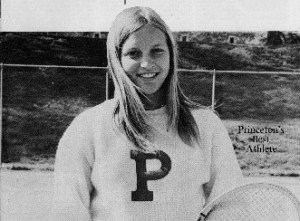 When I reflect on my experience as a student-athlete at Princeton, the words “family” and “pioneer”surface. I grew up in a Princeton family but never aspired to take a personal role since Princeton was an all male institution.

My grandfather John Logan ’13 was a member of the prestigious Walter Camp all-American football team. (Hobey Baker was his teammate on the 1912 roster). As a child, I marched with my father Herbert B. Gengler ’31 in P-rades, and at his 25th reunion, my sister Louise Gengler ’75 and I helped carry his class banner. When I was a teenager, my father took me to watch Bill Bradley play basketball. Truly he was the epitome of a Princeton student-athlete.

When Princeton went co-ed, my father encouraged me to apply. As a sophomore I entered the Class of 1973 and became a pioneer. We were the first class of women matriculating in a fishbowl eyed by wary male classmates and alumni. In the spring of ’71, I extended my pioneering horizons to embrace the student-athlete realm by spearheading the formation of the women’s tennis team – the first and only women’s varsity sport. Needless to say, our team received much attention as we proved that women could be smart and athletic. In May 1973 a picture of me wearing my treasured white letter sweater (which I received for being captain of an undefeated team) appeared on the cover of the Princeton Alumni Weekly with the label “Princeton’s Best Athlete”. During reunions that year I addressed several alumni classes relating my undergraduate experience and demonstrating that female student-athletes were now a part of the Princeton family.

While attending Princeton, I experienced the best of both academic and athletic worlds. Being surrounded by other students who were disciplined, dedicated, and determined in both areas, encouraged me to do my best in the classroom and on the tennis court.

For over 30 years I have valued and benefited from being part of the Princeton family which extends beyond bloodline and is truly worldwide. Whenever I meet a fellow tiger –and especially a student-athlete- there is always an immediate bond and desire to share experiences. My son Trevor ’03 has extended our family’s legacy into the fourth generation. During his senior year he captained the men’s tennis team and now shares my love for and gratefulness towards Princeton and the student-athlete experience.