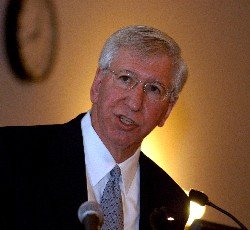 Myles Brand, president of the National Collegiate Athletic Association (NCAA), presented a public lecture entitled “Achieving Fiscal Responsibility in Athletics” on Monday, November 1, 2004 at 7:30 p.m. on the Princeton University campus. The lecture was made possible through a partnership between the Princeton University Department of Athletics and the Woodrow Wilson School of Public and International Affairs.

The event, which was held in the McCosh 50 lecture hall, was free and open to the public. Brand’s lecture was the inaugural event of the Princeton Varsity Club’s new speaker series, presented by Glenmede.

In 2003, Brand was named president of the National Collegiate Athletic Association. As head of the NCAA, Brand is the point person for addressing college and university sports issues including student athlete and coach ethics, athlete welfare and eligibility, enforcement of the NCAA’s rulings and maintenance of the integrity of the association. Prior to joining the NCAA, Brand served as president of Indiana University (IU), where he was credited with guiding IU toward a balance between teaching and research that stood out among its peer schools. A former chair of the American Association of Universities, he sparked media attention and healthy national debate about the role of athletics in higher education during his tenure at IU.

In a speech earlier in 2004 to the National Press Club, Brand said that “intercollegiate athletics can be a vital force inAmerica’s culture, exemplifying the positive spirit and values of our way of life,” but he also expressed his strong belief “that academics must come first.”

With degrees in philosophy from Rensselaer (’64) and the University of Rochester (’67), Brand entered academia as a professor, gradually moving his role to administrator. In addition to serving as president of IU, Brand held the position of chair of philosophy at the University of Illinois-Chicago, elevating the department’s rank to among the top 10 in the nation. He then served as dean of arts and sciences at the University of Arizona, provost and vice president for academic affairs at Ohio State University, and president of the University of Oregon. Mr. Brand also brings an academic research background in investigating the nature of human action, the focal point of which has been on cognitive states of intention, belief, deliberation, reasoning, planning and general goal-directed activity. He has authored numerous publications, and has spoken at colleges, universities and athletic associations throughout the country. One of his most notable and nationally acclaimed speeches was to the National Press Club in 2001, entitled, “Academics First: Reforming Intercollegiate Athletics.” Here, he underscored the need for the academic community to acknowledge and address the disparities that exist between intercollegiate athletics and the true mission of higher education.

The Jake McCandless ’51 PVC Speaker Series began in 2004 with this lecture from NCAA President Myles Brand. The series was endowed in the name of J. L. “Jake” McCandless ’51, who coached Princeton to the 1969 Ivy League football championship during the Tigers’ centennial year of football.