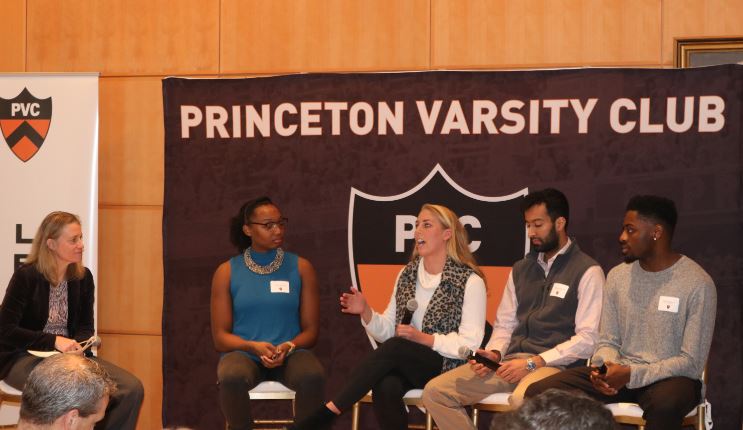 The Princeton Varsity Club hosted its winter edition of the PVC Coaches Luncheon on Tuesday January 16th, where several winter coaches and student-athletes took a break from final exams to share inspiring remarks with our university and community partners. Thank you to our loyal PVC Members, Corporate Partners and members of the Princeton Athletics “Team Around the Team” that attended the event in support of our Tiger coaches and student-athletes.

A complete photo gallery of the event can be view by clicking here.

Following formal remarks from our featured coaches, our four participating student-athletes (noted below) engaged in a panel conversation, moderated by Ford Family Director of Athletics, Mollie Marcoux Samaan ’91. Our student-athletes provided a behind-the-scenes perspective into their Princeton student-athlete experience and shared examples of how Princeton Athletics has afforded them opportunities to Achieve, Serve and Lead through athletic competition, in the classroom and beyond. Conversation ranged from leadership to performance to conference rivalries to what it truly means to “Be A Tiger.”

The luncheon also recognized two student-athletes who were awarded the PNC Bank Student-Athlete Achiever Award for the winter season, which recognizes achievement across academics, athletics and community service. Those honorees were Leslie Robinson ’18 (Women’s Basketball) and Abhimanyu Shah ’18 (Men’s Squash).

The date and location for the PVC Spring Coaches Luncheon will be announced later this Winter.