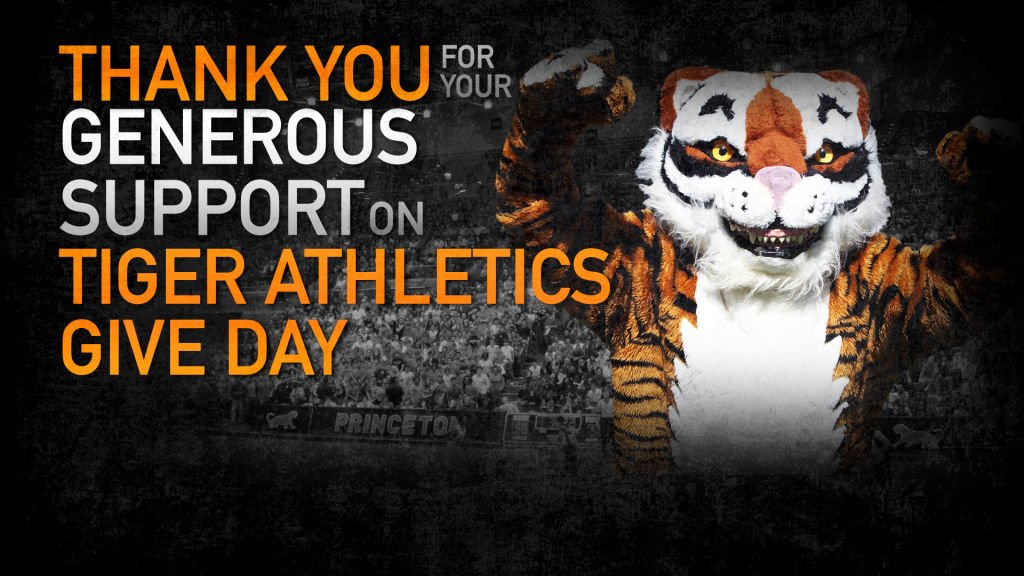 We asked you to show your stripes, and as always, you did.

Princeton Athletics held its second “Tiger Athletics Give Day”, a 24-hour online giving competition, on Dec. 1 – with the theme of “Show Your Stripes” – and the final totals reveal a nearly 50% jump in total dollars raised from the first one.

“We are so thankful to our alumni, parents and friends for coming together in support of our tremendous Princeton student-athletes and coaches,” said Ford Family Director of Athletics Mollie Marcoux ’91. “The money raised on TAGD is critical to our continued success both on the field of play and off and we could not be more appreciative of the generosity of Tiger Nation and of the efforts made by our student-athletes, coaches, staff, campus colleagues and alumni volunteers to make this day so successful. Rest assured that we will work hard every day to continue our unmatched tradition of competitive excellence without compromising our core belief in ‘Education Through Athletics.’ ”

The day pitted Athletics Friends Groups against each other in two main competitions – total number of donors (across three different brackets) and total dollars raised. A total of $170,000 in bonus funds provided by the Princeton Varsity Club (PVC) Board of Directors served as the catalyst for these spirited competitions.

The competition during the 24-hour period was fierce, with several Athletics Friends Groups trading out the top spots throughout the day. In the end, the winners of the total number of donor competitions were the Princeton University Rowing Association in Bracket 1 (1,292 donors), the Friends of Princeton Sprint Football in Bracket 2 (690 donors) and the Friends of Princeton Water Polo in Bracket 3 (533 donors). The top two finishers in Bracket 1 and the top three finishers in Bracket 2 and Bracket 3 will all receive bonus funds from the PVC (1st place = $18,000, 2nd place = $8,000 and 3rd place = $4,500).

The winner in the dollars-raised competition was the Friends of Basketball, who raised $291,402 on the day. Swimming and diving came in second, with $185,258, and the Princeton University Rowing Association was third with $151,641. Every Athletics Friends Groups will receive bonus funds from the PVC based on the percentage of total dollars they raised on the day (with those raising the most receiving a higher percentage payout).

Each of the two Give Days have now in their 24-hour periods shattered the previous record for total number of gifts to Athletic Friends Groups for an entire fiscal year. The individual teams and the Department of Athletics launched an aggressive social media campaign to promote the event, which added an additional element of creativity and fun to the friendly competition. To relive some of the highlights from the day, visit the TAGD website (www.tigerathleticsgiveday.com) and select the “Social Media” tab.

“TAGD gives the PURA an incredible opportunity to mobilize our student athletes, allows them reach out to thousands of dedicated rowing alumni, and helps them realize how important it is to give back to the program” noted Marty Crotty ’98, head coach of the men’s heavyweight rowing team. “This experience will undoubtedly perpetuate the sheer joy of giving back when it is their turn to support Princeton Athletics. In the meantime it is up to all us at the boathouse—coaches and rowers, to thank every single donor by showing them the impact and results of their generosity and loyalty. We work hard at that every day.”