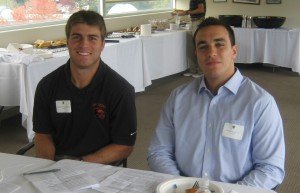 I visited many different schools during the recruiting process, just about all of the Ivy League schools and a few in the ACC. However, there was something about Princeton that made it feel different from all of the rest. When I came on my official visit in December, I was able to pinpoint what that difference was…. the people. Everyone I met, from coaches to players to athletes on other sports teams, had a certain charisma about them that I had never seen anywhere else in my life. After spending 15 minutes on campus my Dad said that he knew exactly where he wanted to go to school, and it was not long after that I realized the same thing, I wanted to be a Princeton Tiger.

Another reason I decided to attend Princeton was the facilities. Every kid who has ever dreamed about playing college football will tell you that playing in a great stadium is one of the most appealing aspects to a college team. My jaw dropped the first time I saw Palmer Stadium and the butterflies began to buzz in my stomach as I envisioned myself playing football in such a great facility. In addition to the stadium, Princeton had more Nike equipment than I had ever seen in my life, not to mention alternate orange jerseys.

Mr. Walters’ motto, “Education through Athletics,” is something I would have never understood if I had not played football here at Princeton University. I have learned so much about myself: my work ethic, my character, my leadership abilities and my ability to take criticism, in my four years in this program. Whether it be waking up at 5:45 in the morning and walking from Mathey College down to Jadwin Gym in a snow storm for winter conditioning or spending my summers on campus lifting weights and preparing for the season, I have truly learned who I am.

However, there is no way I would have been able to make it through these four years if I was not surrounded by such great people. There is a unique bond that all of the athletes share on this campus, we have all been pushed to exhaustion both physically and mentally and lived to reminisce about it. I cannot even count the number of times my teammates and I have recalled an early morning workout that pushed us to the absolute edge. But at the end of the conversation we acknowledge the fact that it has made us stronger, not only as a person but in our friendships as well.

However, it is not just the students I have met here that have defined my experience but the alumni as well. Every Saturday I receive emails from Princeton Football Alums, ranging from the class of 1972 to 1992 to 2008 all wishing me good luck in the game. It is incredible to know how many people are behind our program and want to see us succeed not only on the football field but also in life. My first real experience with the alumni support came after our double overtime win last year over Lafayette. Following the game Dick Kazmaier shook my hand and said, “You are a great player, I know you will do great things.” This is a moment that I know I will never forget. It is the unique experiences like these along with the great friendships I have made that make the Princeton Football experience unique. I truly feel as though I can accomplish anything I set out to do by applying what I have learned over my four years in this program. Hard work, friendships and resiliency are what define my time as a Princeton Football player. Thank you very much.