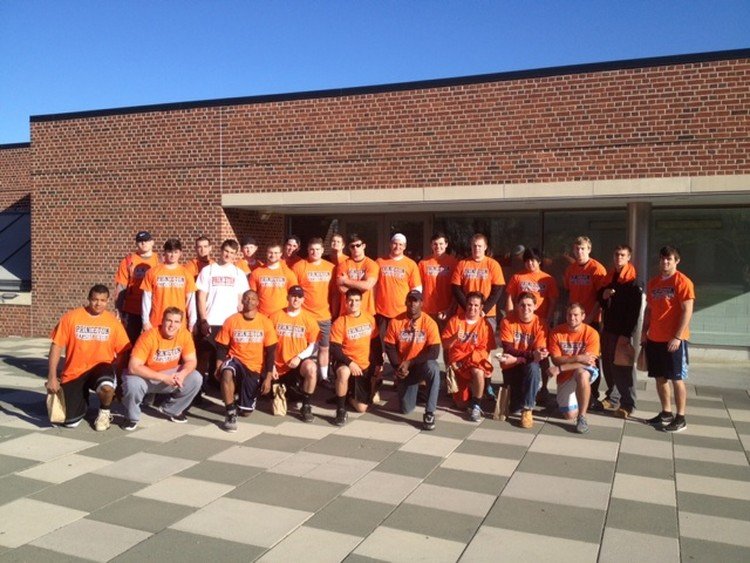 Working with Jersey Cares, a non-profit organization that coordinates volunteer opportunities to address community-identified needs, over 60 Princeton student-athletes were able to help in the rebuilding effort from Toms River up to Mantoloking. Projects ranged from planting shrubs at a local high school to installing drywall in a local resident’s home to preforming a complete muck out and home gutting of a family in need. At each of the seven sites, the athletes were connected with individuals that were devastated by the hurricane and in need of community support.

Many of the Tiger student-athletes who volunteered had not been to the shore since the storm hit. “It’s pretty amazing that even this long after the storm that there is this much damage. I had no idea,” said Jimmy von Thorn ’15 of the football team.

Joe Saitta ’15 witnessed the longstanding aftereffects caused by flooding in the home he helped to rebuild. “For a lot of people in this area, the flooding was extensive, and especially in this home, it came all the way up to the windows. It literally forced them out of their house in the middle of the night. As a result, a lot of the drywall was damaged, so we’re helping to repair that today.” Joe not only had the chance to work alongside his teammates, and other Tiger student-athletes, but also with head men’s soccer coach Jim Barlow ’91, and assistant coach, Steve Totten, who both volunteered to help with the rebuilding effort.

At two of sites, the damage was so extensive that volunteers needed to wear full Tyvek suits, respirators, goggles and gloves as they helped the homeowners remove damaged furniture and tear out insulation that had been ruined during the storm.

For men’s basketball senior, Brendan Connolly, WOMC was his first visit to the Jersey Shore. ““I always thought my first trip would be a fun vacation, but we were driving along the shore and you see all the houses and there are some that are completely ruined… it is just so much different seeing it here than seeing it on TV. It’s pretty shocking, and sad. We’re glad that we can help out, even if it’s just in a small way.”

“I think that the most meaningful and impactful part of this experience has been just getting out in the community, helping people, and being a part of something that’s greater than myself, ” said M.E. Jonas ’14 of the women’s swimming and diving team.

2013 marks the fifth year that the Princeton Varsity Club has organized Weapons of Mass Construction as a way to bring together student-athletes across all sports, in order to help serve the community.

For Ford Family Director of Athletics, Gary Walters ’67, service to the community is extremely important. “Being a part of Princeton Athletics is a privilege that carries with it great responsibility…a responsibility to represent your University and your team to the best of your abilities and in all that you do. That includes your performance in the classroom, on the fields of play, and in the community. Weapons of Mass Construction is a way for student-athletes, coaches and administrators who are so fortunate, to be able to continually give back, and to do so as a team united by the Princeton Varsity Club.”