Weapons of Mass Construction: By the Year 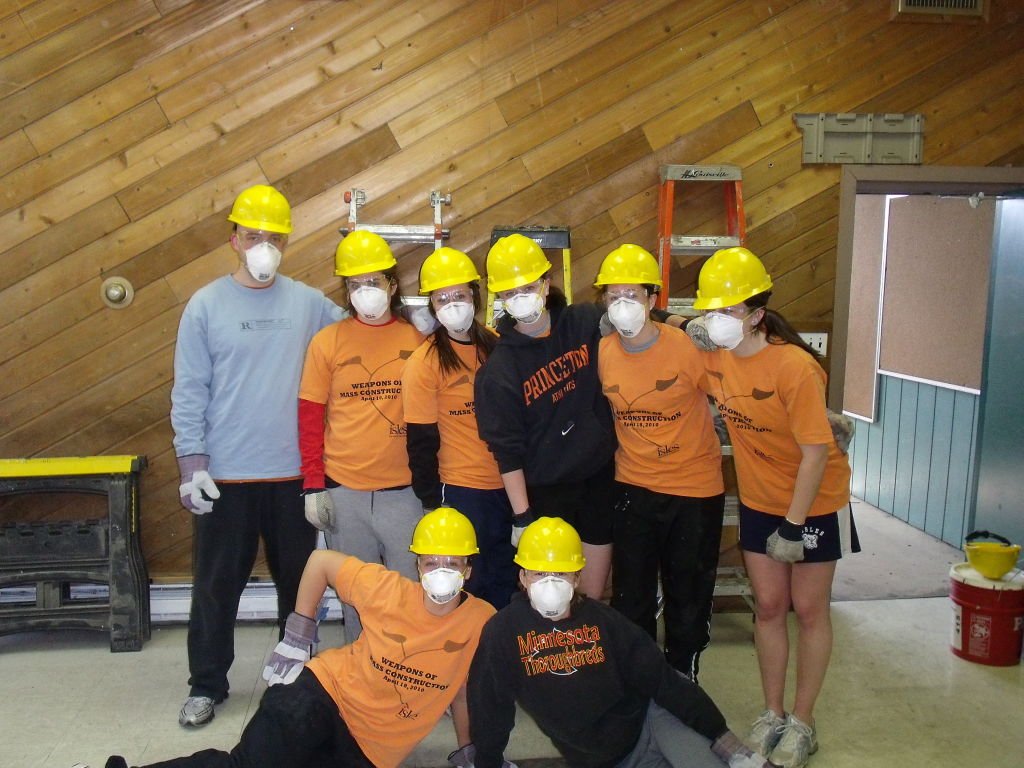 “One of the great things about Princeton University is that any three or four students can get together and form a course.”
Year Five – Fall 2012, Spring 2013
2012-13 marked the fifth year and two installments of the Weapons of Mass Construction community service initiative spearheaded by the PVC.

In the fall, 40 student-athletes helped to build the Ghandi Garden, which has served as a safe and inspiring space to the city of Trenton. The group worked on two garden areas, including laying/spreading gravel, assembling and installing raised beds to prepare the sites for spring planting.

Year Four – 2012
More than 80 student-athletes headed to the YMCA of Trenton this spring for the fourth edition of the Princeton Varsity Club’s signature community service event, Weapons of Mass Construction. The group helped refurbish the lobby, locker rooms, fitness center, and playground facilities for the Trenton nonprofit, which hosts a preschool and a burgeoning membership base.

Year Three – 2011
Over 130 Princeton student-athletes, coaches, administrators, and faculty fellows headed to Trenton/Hamilton border to contribute to the renovation process at Mill One, a future “sustainable urban village.” Representatives of 12 Princeton athletic programs spent the afternoon working in and around a 240,000 square foot, 110-year-old textile mill which will serve as a mixed-use, environmentally-friendly “campus” when completed. The event was organized by the Princeton Varsity Club, in conjunction with Isles, Inc. of Trenton.

Due to its large size, the group was divided into “teams,” each of which had representatives from multiple sport programs. Two groups cleared debris and installed raised-bed planters at an “urban farm” outside the mill. The planters will keep plant roots from being contaminated by heavy metals present in the majority of the soil during future farming efforts.  Two additional groups conducted demolition work and stripped and re-applied paint inside the facility. Plans for the mill include community services, a business incubator, an arts hub, a training center, loft housing, and neighborhood retail space.

Year Two – 2010
The second installment of Weapons of Mass Construction, organized in the spring of 2010, featured the creation of a 10,000 square foot garden that was formed to not only grow fresh vegetables, but as a way to teach young men and women about the importance of farming. The site for the garden is located right outside the doors of the Isles YouthBuild Institute in downtown Trenton and has been used as teaching tool for the YouthGrow teen gardening program that focuses on urban agriculture and ensuring that community gardens are available for the residents of Trenton to gain access to healthy food. Over the course of the year, participants in the YouthGrow program will receive 150 hours of instruction, with a heightened focus in the summer months.

Year One – 2009
In the spring of 2009, over a hundred Princeton student-athletes, administrators and coaches were greeted by Marty Johnson ’81, the Founder and CEO of Isles, Inc and a Princeton football letter winner. The initial collaboration focused on Mill One, a 6.5 acre site that is being converted by Isles, Inc into a mixed used, green village that will ultimately house offices for public interest and environmental organizations, a training center for inner city youth, as well as homes and artist studios. Volunteers had the opportunity to participate in interior and exterior demolition, painting, and landscaping.

As the Director of Athletics, Gary Walters ’67 has shared his vision of “Education through Athletics” with all members of the athletic community at Princeton. “Being a part of Princeton Athletics is a privilege that carries with it great responsibility…a responsibility to represent your University and your team to the best of your abilities and in all that you do. That includes your performance in the classroom, on the fields of play, and in the community. Weapons of Mass Construction is a way for student-athletes, coaches and administrators who are so fortunate, to be able to continually give back, and to do so as a team united by the Princeton Varsity Club.”