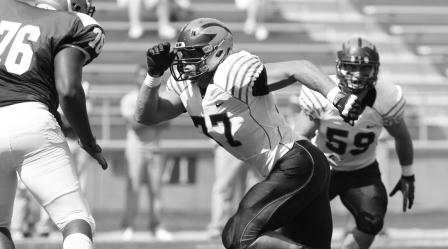 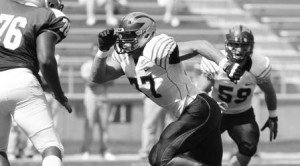 “Thank you, and good afternoon everyone. I am tremendously honored and privileged to be standing before you today as a representative of this University and its historic football program. It would be simply impossible for me to convey to you what this experience of being a student athlete at Princeton has truly meant for me, because honestly it has meant absolutely everything in the world to me. The lessons that I have learned during my time as a varsity athlete at the most challenging academic university in the world are simply uncountable, but I assure you that every single one has been priceless. I think that our Athletic Director, Mr. Gary Walters, has really hit the nail on the head when he preaches the idea of “Education Through Athletics,” because I can personally testify that I have learned THE most important things about myself as a man, and even about life in general through my very intense “Education Through Athletics” that I have received from Princeton.

The first lesson that the class, “Varsity Football 101,” taught me at Princeton University is that, nothing worth having is ever easy. When I arrived on campus I was really taken aback with how incredibly difficult this was going to be. For those of you that know football, I had never even played defense before I got to college. Believe it or not I was actually a running-back up until college, which is very….very different then the defensive end position that I play today. I was also very undersized, probably by around 50 pounds. So I was basically out there every day not knowing what in the world I was doing, and I was way too small to do anything good out there even if I did know what I was doing. Needless to say my freshman year football experience consisted of long hours of getting my tail whipped every single day. On top of that, my freshman year academic experience consisted of long hours of class, long hours of studying, and many more long hours of wondering what the heck I got myself into. But like I said, these experiences proved to be some of the most rewarding than I ever could have imagined at the time. Even though I was taking these beatings on the field and my freshman year GPA was probably a negative number that experience really ignited a fire in me that I will never forget.

Which brings me to lesson #2 that Football 101 taught me and still teaches me every single day: don’t quit. I don’t care how good you are at the game of football, during one simple day at practice you will probably knocked on your rear-end 100 times. My freshman year I got knocked down hard on the field, and in the classroom, but I took it as a challenge to myself to get better in both of these areas. In the offseason from my freshman to sophomore year I gained about 50 pounds of muscle so that I could compete at the level I wanted to and knew I was able to. I sought out tutors and studied harder and long than I ever thought I could, finally earning some respectable grades. I ended up starting as a sophomore on the football team, which seemed like the longest of longshots if you judged me by my freshman season, and my GPA finally was going up. I am proud to say I have even stayed on the incline, doing better and better in school, and getting better and better on the football field as each year has passed.

But even when things were going well, Football 101 had one more lesson to teach me that I found truly defining, maybe more than anything else I had learned up until that point — and that was to take nothing for granted. Football season, the championship game, and that six-second-last-play-of-the-game all have one thing in common: they will eventually come to an end. Our academic careers, professional careers, and even our lives; it all eventually comes to an end. You never know what tomorrow, or the next play, has in store for you so you better give everything that you possibly have in the present, one play at a time. I think in football the injuries really have instilled this lesson in me more than anything because, as a football player, you know how easy it is to get injured so you know to give it your all on each and every play. My senior year of high school, I had to endure three shoulder surgeries and spent nearly the entire year in a sling. It took one play to send my shoulder into a year of rehab, and I was lucky that I was even able to play again at the collegiate level. I was even luckier that a fantastic school like Princeton still recruited me to play even though I had that terrible injury. The sport really teaches you that life will be hard, but you cannot quit, and no matter what you cannot take anything for granted.

I don’t think any lessons are more important to the development of a young adult than those I just shared with you, and I was truly lucky and blessed to have been able to learn them here, as a proud Princeton tiger.

Thank you all for your time, and Go Tigers!”