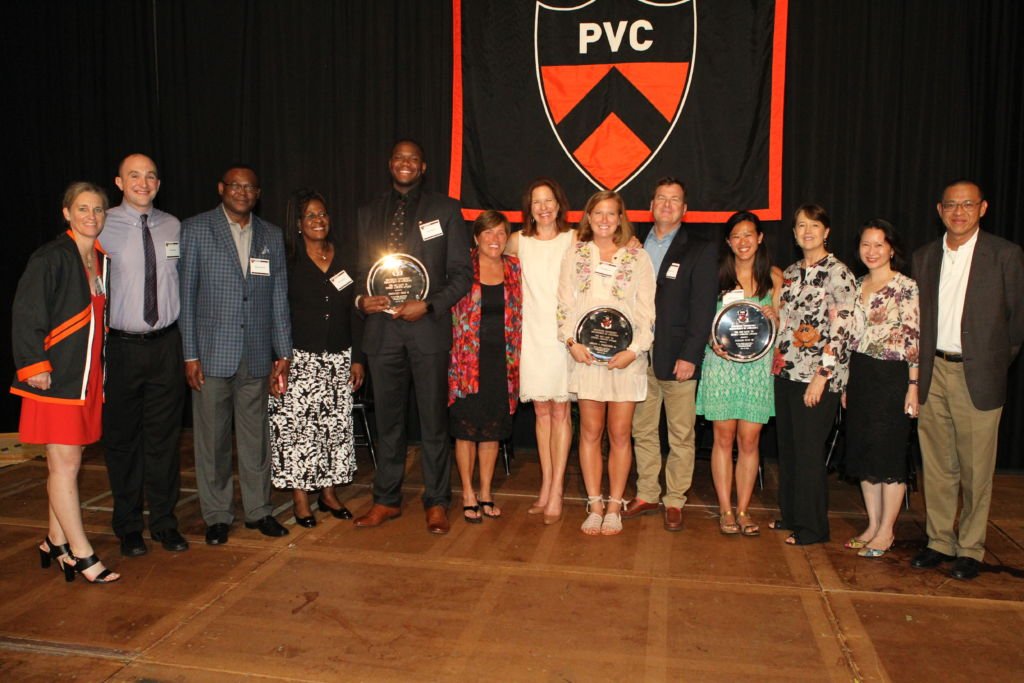 The Princeton Varsity Club and the Department of Athletics held the 21st edition of the PVC Awards Banquet, now known as the Gary Walters ’67 PVC Awards Banquet, on Thursday, May 31st to celebrate the accomplishments of the Princeton Athletics Class of 2018. Due to the forecast for inclement weather, the event was moved from the Princeton Graduate College to the friendly confines of Jadwin Gym, where nearly 680 attendees comprised of families, friends, coaches, staff and many others in the Princeton community, came together to celebrate the 219 graduating Tiger student-athletes.

Click here to view the complete photo gallery from the evening. 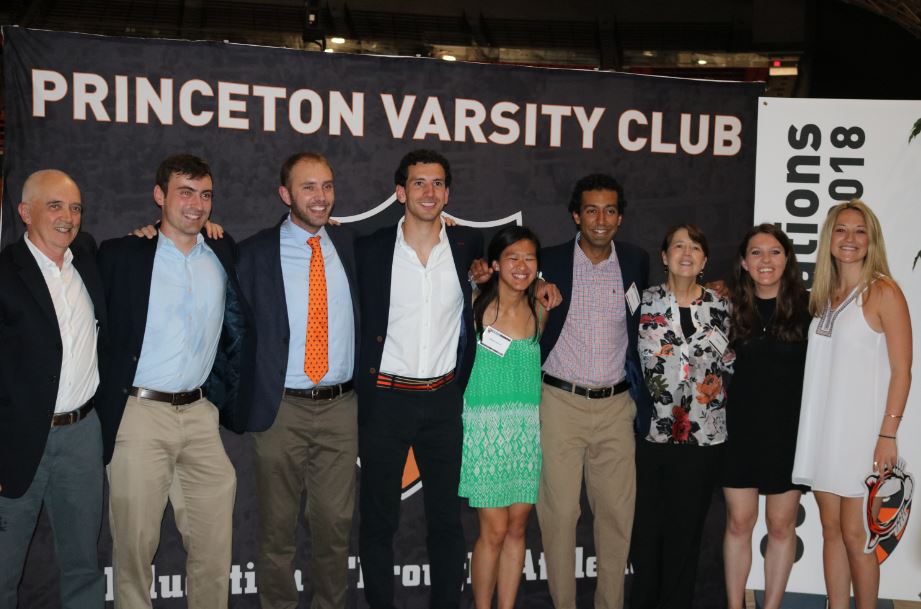 The event was emceed by Ford Family Director of Athletics, Mollie Marcoux Samaan ’91, who presented the department’s top student-athlete and alumni awards while speaking to the collective successes of the Princeton Athletics’ Class of 2018, both on and off the field of play. As part of a surprise presentation, women’s water polo seniors Haley Wan ’18 and Sydney Cheong ’18 presented Marcoux Samaan with an honorary degree from the Class of 2018. In addition to the below student-athlete awards, heartfelt and inspiring keynote remarks were provided by Class of 1967 Citizen-Athlete Award recipient Denna Laing ’14, as well as Marvin Bressler Award recipient Dov Weinryb Grohsgal *13 h14.

Click here to read more on Denna and Dov’s respective accolades and awards, and hear their remarks from the evening. 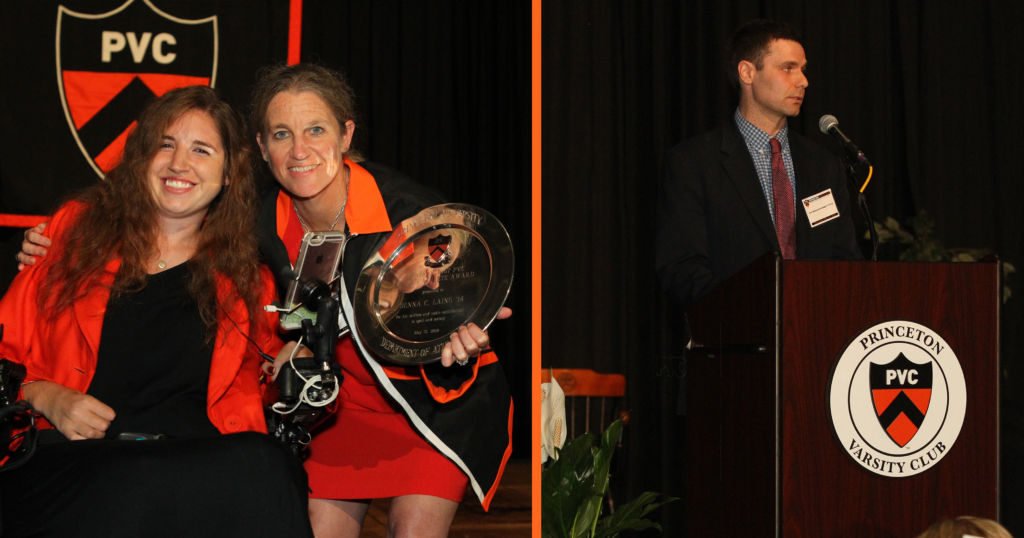 The 2018 Ivy League Offensive Player of the Year for women’s soccer and an anthropology major from Beaconsfield, Quebec, Vanessa Gregoire was a co-captain as the Tigers won the Ivy League championship and advanced to the NCAA quarterfinals this past fall, upsetting second-ranked and 22-time NCAA champion North Carolina along the way. 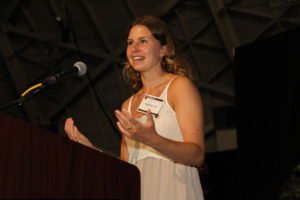 The Ivy League’s coaches recognized Gregoire’s abilities in facilitating in the midfield in awarding her the Ivy Player of the Year award. Her league-best eight assists this past season gave her 27 for her career, breaking a Princeton record co-held by former teammate Lauren Lazo ’15 and fellow Canadian national team player Diana Matheson ’08. Beyond setting up goals, Gregoire scored a few of her own during the 2017 campaign, doing so in three consecutive Ivy League games as the Tigers rebounded from a loss to Columbia to overtake the Lions for the Ivy title. Gregoire scored the only goal in a win at Penn that ended the regular season, and later that night, once Columbia tied Harvard, the outright Ivy title belonged to the Tigers.

Gregoire closed her career with a United Soccer Coaches second-team All-America honor last season as well as first-team All-East Region and a spot as a MAC Hermann Trophy semifinalist. Along with the Ivy Offensive Player of the Year award, Gregoire was a first-team All-Ivy League honoree in 2017, making it four All-Ivy honors in four years after another first-team recognition in 2015 as the Tigers made it to the second round of the NCAA tournament and two honorable mentions in 2014 and 2016.

A Pacific Palisades, Calif., native who graduated from the Woodrow Wilson School of Public and International Affairs, Chad Kanoff rewrote the Princeton football record book throughout his championship career. An All-Ivy League starting quarterback during the Tigers’ 2016 Ivy championship season, Kanoff produced the most statistically dominant season for an Ivy quarterback last fall as a senior. 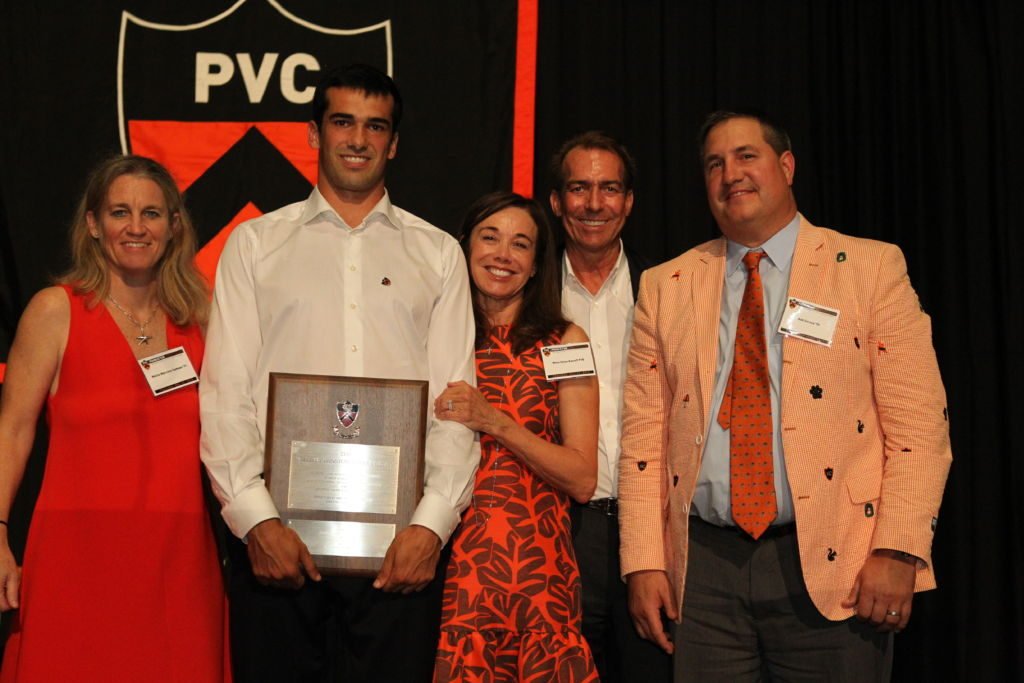 Kanoff, who won the 2017 Bushnell Cup winner as the Ivy League Offensive Player of the Year, set the Ivy League record with both 3,474 passing yards and a 73.2 completion percentage during his senior season. He broke the Princeton single-season record for passing touchdowns, and he set the program record for career passing yards. Kanoff helped produce the Ivy League’s top-ranked offense in each of the last two seasons, and his efficiency was never more apparent than when he completed 31 of 35 passes for 421 yards and two touchdowns in a 52-17 win at Harvard last fall. Kanoff, who started the last 30 games of his career for Princeton, signed a contract with the Arizona Cardinals in the offseason.

A mechanical & aerospace engineering major from San Diego, Calif., Delaney Miller has been a member of both the Princeton cross country and track & field teams for all four years. In addition to her running career, Delaney is obviously an incredibly accomplished student. Beyond her mechanical engineering major, she is also pursuing a certificate in robotics and intelligent systems and is very interested in exploring biomechanics and medical robotics. 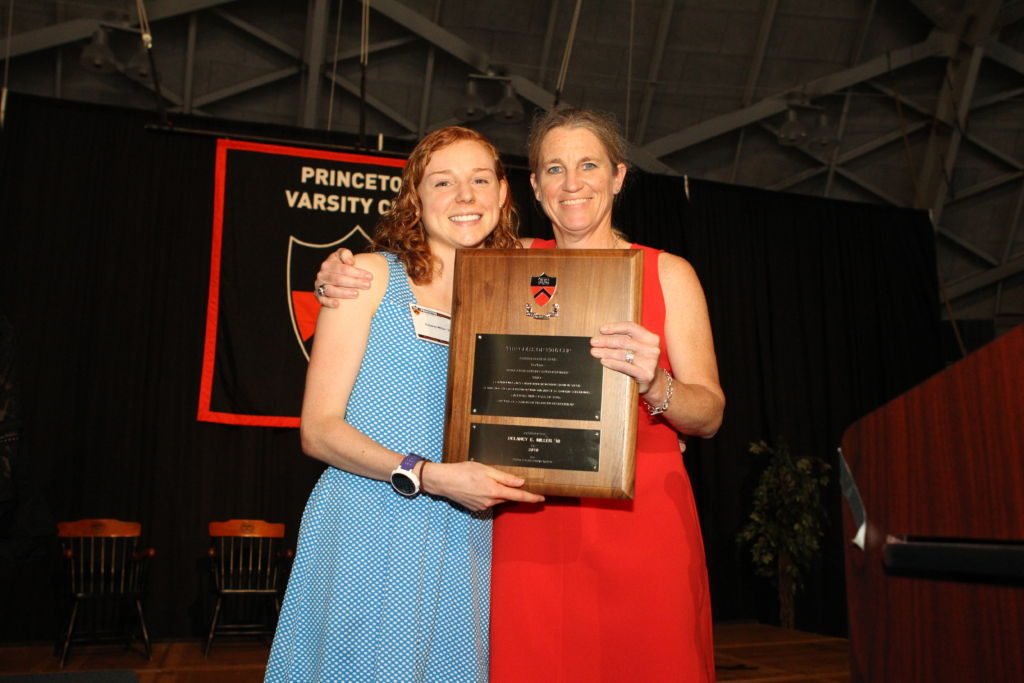 Her senior thesis was entitled: “Assessment of a Wireless Accelerometer System for Tracking Asymmetries in Gait.” She is a member of the Tau Beta Pi Engineering Society and won the Myers Award, which is the track and field team’s scholarship award. She will begin working on her Ph.D. in mechanical engineering at Stanford this fall.

This past summer she had an internship that included work on the design of a variable stiffness ankle prosthesis. While at Stanford, she will also work in the Biomechatronics Lab, which focuses on developing wearable robotics (exoskeletons, prostheses) to improve human mobility. Among her other pursuits at Princeton, she has also been Residential College Advisor at Butler and a Student-Athlete Wellness Leader.

As a runner, her best Heps finish came indoors in 2017, when she finished seventh in the mile. Her best cross country 6K time was a 21:27.8 at the 2017 Paul Short Run, where Princeton took fifth in the gold race. She also competed for the cross country team at the 2016 Ivy Heps. She also has competed in the 1500 in three Ivy Heps outdoors and the mile in three indoor Heps. She ran two personal bests in the Larry Ellis Invitational this year, when she clocked a 2:14.41 in the 800 and a 4:26.34 in the 1500.

The Art Lane Award is presented annually to undergraduate student-athletes in recognition of selfless contribution to sport and society and was given in memory of Art Lane ’34 by friends and family. 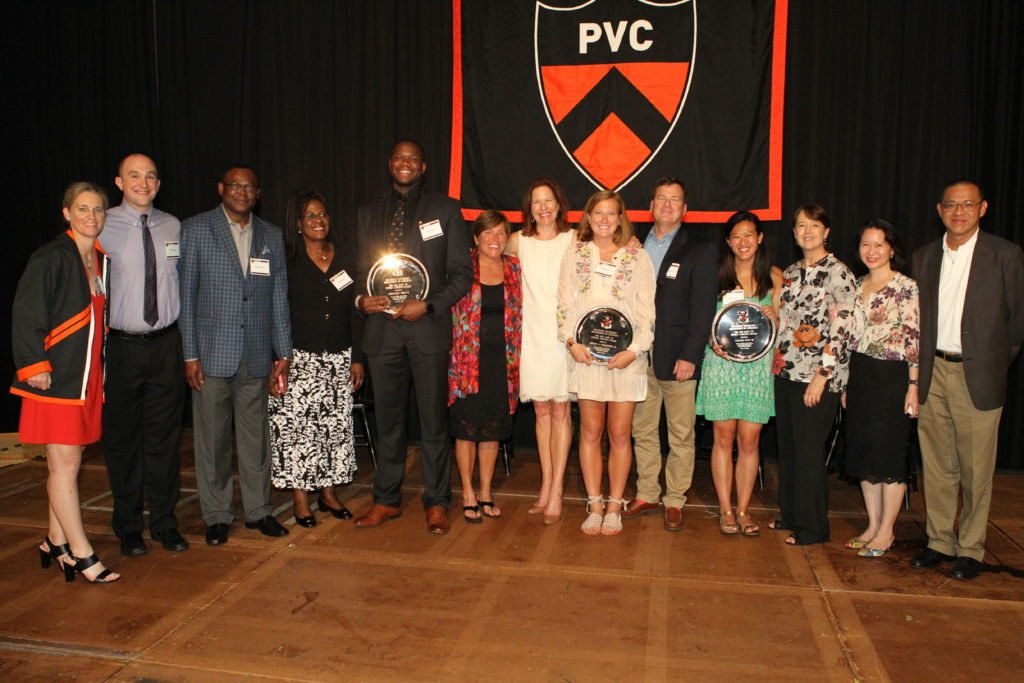 Abby Finkelston, a Neuroscience major and team captain for the four-time Ivy League champion women’s lacrosse team, has made a lasting impact that stretches far beyond the lacrosse field. After two successful seasons, Abby suffered an injury that sidelined her from game action, but did little to prevent her from positively impacting the lacrosse program and greater campus community. Abby founded and chaired the Wounded Tigers Network, a group comprised of Princeton student-athletes that offer support and guidance to other injured student-athletes on campus. In addition to her on-campus service impact with the Princeton Student-Athlete Service Council, Abby has served her community through her volunteer efforts with the local Best Buddies organization, Meals on Wheels, Trenton Senior Center, Harlem Lacrosse and the Special Olympics. For her on-field and community service efforts, Abby was nationally recognized with the prestigious “Unsung Hero” of women’s college lacrosse by the One Love Foundation in 2017.

Ehidiamen “Junior” Oboh, a History major and three-time All-EIVA performer for the men’s volleyball team, captained the 2018 Tigers to the EIVA championship match. Equally impressive to his contributions on the court, Junior has demonstrated a commitment to mentorship throughout campus, working diligently to serve others in the Princeton community through his active involvement in Princeton Faith & Action, the Princeton African Students Association and Profound Ivy, a student group for black male athletes. He has also led on campus as the Vice President of the Varsity Student Athletic Advisory Committee (VSAAC), a Student Athlete Wellness Leader and a Board Member of the Black Men’s Awareness Group. In his VSAAC role, Junior helped organize the “All Stripes One Streak” campaign, aimed to promote diversity and inclusion within Princeton Athletics and beyond. Junior was selected to represent the Ivy League as its student-athlete representative at the 2017 NCAA National Leadership Forum.

Natalie Tung, an English major and four-year member of the women’s squash team, has dedicated herself to service both on campus and in the greater Princeton community. Natalie is co-founder and executive director of HomeWorks, a non-profit organization that provides an after-school boarding program to underserved middle and high school girls in Trenton, NJ. The program strives to empower women by providing strong academic support and a stable environment to further their education. Additionally, Natalie has served as a youth mentor as part of both Camp Kesem and the Big-sib Little-sib program. On campus, Natalie served as Student-Athlete Wellness Leader, member of the eHub Princeton Entrepreneurship Council Incubator and Accelerator Program and a Peer Arts Advisor for Creative Writing. As a junior, the Creative Writing Department recognized Natalie with the “Princeton Outstanding Work by a Junior in Creative Writing Prize.” 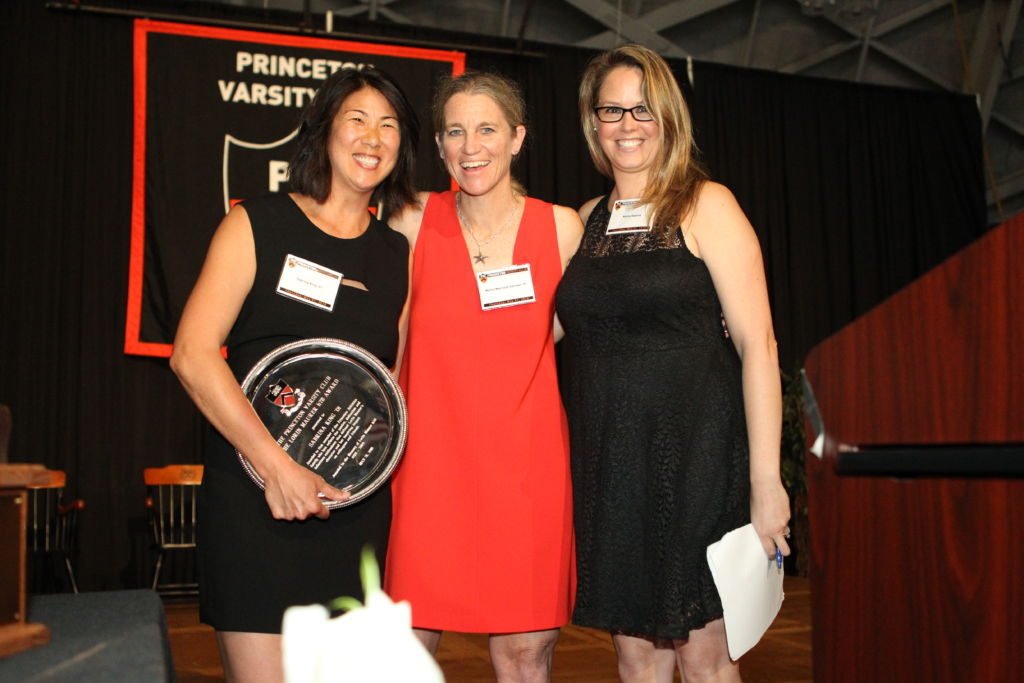 We wish all 2018 graduating student-athletes the best of luck in their future endeavors!