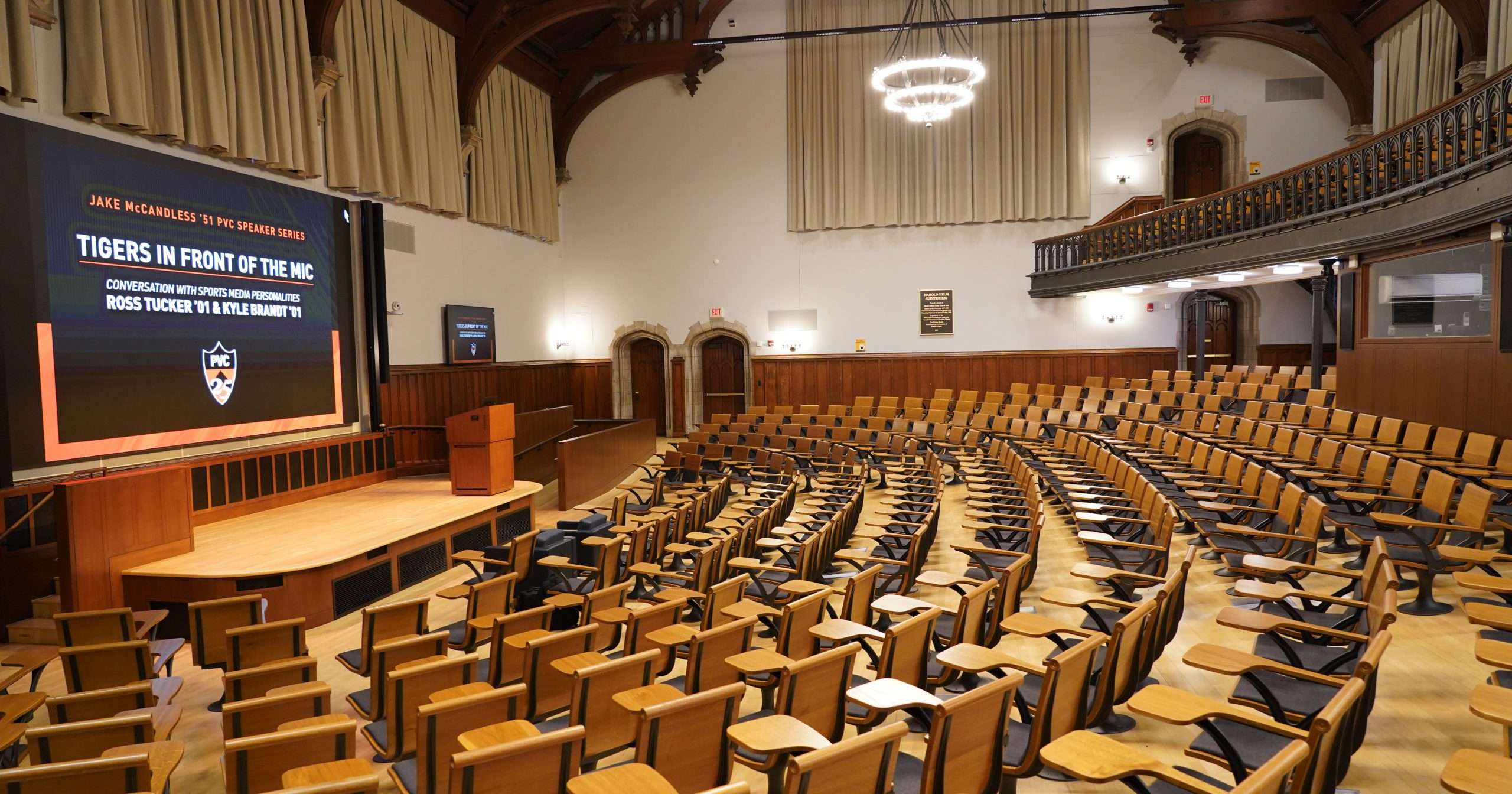 The Princeton Varsity Club is excited to welcome Ross Tucker ’01 and Kyle Brandt ’01 back to campus on Wednesday, March 23rd as part of the Jake McCandless ’51 PVC Speaker Series. The event will take place on campus in McCosh Hall Room 50 (pictured above) at 7:30 p.m., and is free and open to the entire Princeton community (COVID Policy noted below).

Ross Tucker ’01 and Kyle Brandt ’01 are former Princeton football teammates who have gone on to impressive and diverse careers as mainstream sports media personalities, including current roles as TV studio hosts, NFL game analysts, podcast hosts, etc. Tucker enjoyed a seven-year playing career in the NFL before transitioning in front of the camera, while Brandt started his career on the sets of popular reality TV and soap opera series.

Tucker and Brandt will be joined by Ford Family Director of Athletics, John Mack ’00 for what is sure to be a dynamic and entertaining conversation. Click here for a preview of our featured guests on a recent joint podcast.

COVID POLICY: in accordance with current University policy, all attendees over the age of five must be fully vaccinated against COVID-19 (an on-site attestation form will be available for visitors/attendees not currently in the University testing protocol). Face coverings will be optional. Ability to social distance at the event may not be possible.

LEARN MORE ABOUT OUR FEATURED SPEAKERS

Ross Tucker ’01, a Politics major, was a two-time Academic All-American and offensive lineman for Princeton football before going on to play seven years in the National Football League (NFL). Tucker played for the Redskins, Cowboys, Bills and Patriots, and was named to the USA Today “All-Joe” team in 2003. He retired from the NFL in 2008, and leveraged his passion for football to begin a new career as a professional sports commentator and successful businessman. Tucker is now a game analyst for the Philadelphia Eagles, CBS Sports, and Westwood One in addition to his year-round duties for Entercom and The Athletic. He is also the co-founder of RT Media, which owns and operates all of his podcasts including the flagship Ross Tucker Football Podcast.

Kyle Brandt ’01 was an English major and three-year starter at running back and kick returner for Princeton football, and also appeared in several campus theatre productions. After graduation, he appeared on the hit MTV show The Real World Chicago (2001), and then as a lead on the soap opera Days of Our Lives (2003-06). In 2007 he joined The Jim Rome Show where he served as senior writer, producer and eventually executive producer. Today, he serves as a co-host of the popular NFL Network show Good Morning Football. He also recently launched the popular podcast Ten Questions With Kyle Brandt, which interviews celebrity guests through a series of trivia questions relating to their childhoods and careers.