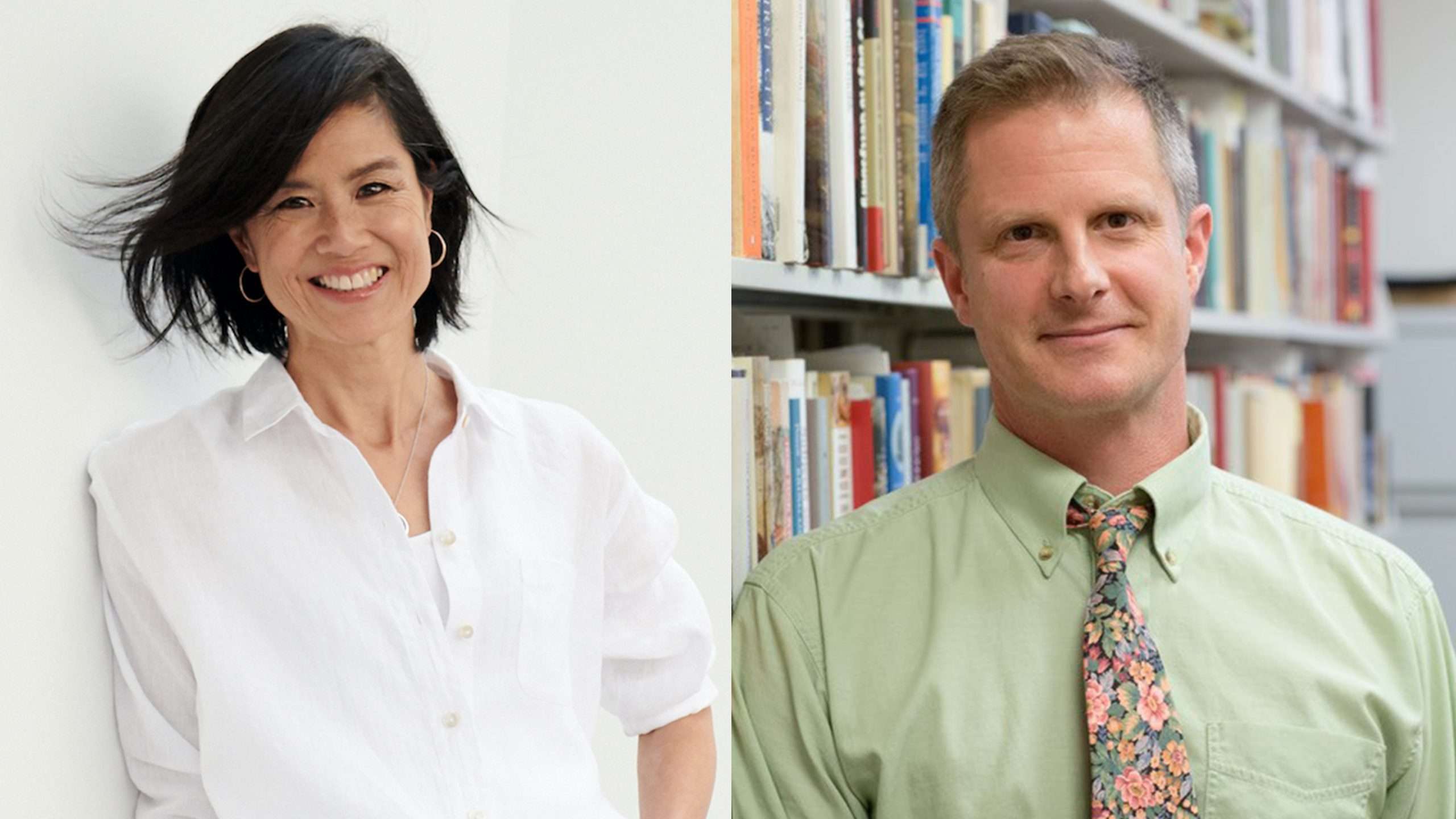 Sari Chang Guthrie ’84, a women’s track & field alum who has gone on to a storied career as an architect and civic-minded leader, and Alec Dun *04, a widely respected historian and University administrator with an extraordinary commitment to the undergraduate student education and experience, will both be honored as major award recipients at the Gary Walters ’67 Princeton Varsity Club Awards Banquet this Thursday, May 19, in Jadwin Gymnasium.

Chang Guthrie is the 2022 recipient of the Class of 1967 PVC Citizen-Athlete Award, presented by the PVC for selfless and noble contributions to sport and society.

Dun is the 2022 recipient of the Marvin Bressler Award, given to that member of the Princeton family who, through heartfelt support of the University’s student-athletes and coaches, best embodies a belief in the lifelong lessons taught by competition and athletics as a complement to the overall educational mission in the spirit of Marvin Bressler, a Princeton professor of sociology from 1963-94.

“We are so thrilled to have the opportunity to recognize Sari and Alec with these departmental awards,” says Ford Family Director of Athletics John Mack ’00. “Sari and Alec have epitomized everything that Princeton Athletics strives to be with their spirit of community, loyalty, excellence and inclusiveness. They are two wonderful representatives of Princeton University, and it will be a great honor for the entire Princeton Athletics family to be there to share this moment with them.”

Sari Chang Guthrie ’84 is a Registered Architect and principal at JACOBSCHANG Architecture in New York City. She focuses on projects that have environmental and social impact, while cultivating sustained individual, civic, and institutional relationships. Chang oversees projects from pre-design through fabrication and construction, partnering with companies, private organizations/institutions, public advocacy groups, and residential clients. In New York City, Sari has focused attention on her own neighborhood where advocacy groups have utilized JACOBSCHANG’s design services to catalyze projects to revitalize the waterfront on northern Manhattan’s east side with an emphasis on equity and social justice.

A native of Needham, Mass., Chang became an immediate standout on the women’s track & field team upon her arrival to Princeton. Competing in the hurdles, high jump, long jump and pentathlon, she became the first Women’s Indoor Heps individual champion in Princeton history. During her career in the Orange and Black, Chang garnered first team All-League honors in the 55m hurdles, long jump and 4x200m indoors, and 100m hurdles and long jump outdoor. She graduated from Princeton in 1984 with a degree in Architecture, later earning a Master of Architecture from Yale University.

After graduating Princeton, Chang signed with the Abrams Artists Agency and Elite Model Management en route to becoming a professional actress and fashion model. During 6 years full time in the entertainment industry, she appeared in household television shows like The Cosby Show, 21 Jump Street and Flipper; movies including China Girl and King of New York; and numerous television commercials. Chang is a longstanding union member of the Screen Actors Guild (SAG) and American Federation of Television and Radio Artists (AFTRA).

She left the entertainment industry to return to graduate school and pursue her architectural career. She worked with Pei Cobb Freed and Partners in New York on numerous award-winning projects for university campuses, including Stanford and Princeton Universities. Subsequently Chang worked at Rogers Marvel Architects as the Project Architect for Kate Spade, and for many years worked as the principal of her own practice.

Adding to her eclectic professional passions, for the past 9 years she has been a seasonal weekend ski instructor at Stratton Mountain in Vermont and is a member of the Professional Ski Instructors of America (PSIA).

Chang has made a commitment to service and her community throughout her professional career. She sits on numerous boards and councils, and is currently a Board Director of Friends of the East River Esplanade, Family Advisory Council Member of NYU Langone Hassenfeld Hospital and Advisory Council Member of Princeton Blairstown Center. She is the Vice-Chair of the Board and Co-Chair of Diversity, Equity, Inclusion and Accessibility Committee for the National Dance Institute, helping to empower New York City public school children through dance and live music. Additionally, Chang is the Chair of Governance and former Board Chair of Make-A-Wish Metro NY and Western NY, having been a leader within the organization for more than a decade. She has helped raise funds to support the purchase of medical equipment needs (i.e., wheelchairs, medical beds, and handicap accessibility) as part of the wishes of several children.

Chang, who married classmate and record-setting receiver for Princeton football, Kevin Guthrie ’84, has also dedicated herself to the Princeton University community. She has been active with the Asian Alumni Association, Schools Committee and Annual Giving Class Leadership including co-chairing the Special Gifts Committee for her 25th Reunion. An active leader and volunteer with the Friends of Princeton Track & Field/Cross Country, Chang was recognized as the Larry Ellis Alumni Award recipient in 2019, which celebrates alumni who have made significant contributions to the Track & Field program both during and after their time in a Princeton uniform.

Alec Dun serves as Associate Dean in Princeton University’s Office of the Dean of the College. In his role, Dun provides guidance to students, faculty and other constituents on matters affecting the academic lives of undergraduates and helps to manage and balance the relationship between academic and athletic affairs. In addition to being a resource for nearly 1,000 varsity student-athletes, Dun is a long-standing Athletic Fellow for the Princeton men’s and women’s tennis programs.

Dun works closely with Athletics’ Student-Athlete Services team to oversee and shape the entire Princeton Athletics Fellows program. He partners with his colleagues in the Office of the Dean of the College to shape the roles of fellows and enhance the advising experiences of student-athletes. Dun is a strong advocate for all Princeton student-athletes and works closely with the Office of the Registrar and Athletic Compliance to manage all athletic eligibility matters.

An Amherst College graduate, Dun earned a degree in history and competed for both the tennis and squash teams. He came to Princeton in 1997 as a graduate student in History and received his doctorate in 2004. He then taught in the History Department for the following 13 years, serving as junior adviser and departmental representative for various periods along the way.

During his time at Princeton, Dun has also taught in the Freshman Seminars Program and the Freshman Scholars Institute, served as an academic adviser for Butler College and has been a mentor in the Scholars Institute Fellows Program. A historian specializing in early America and with a particular interest in issues involving race, slavery, and revolution, Dun is the author of several essays and articles, as well as the 2016 book, Dangerous Neighbors: Making the Haitian Revolution in Early America.